HomeENTERTAINMENTWhat does Johnny Depp-Amber Heard trial has to do with alpacas?
ENTERTAINMENT

What does Johnny Depp-Amber Heard trial has to do with alpacas? 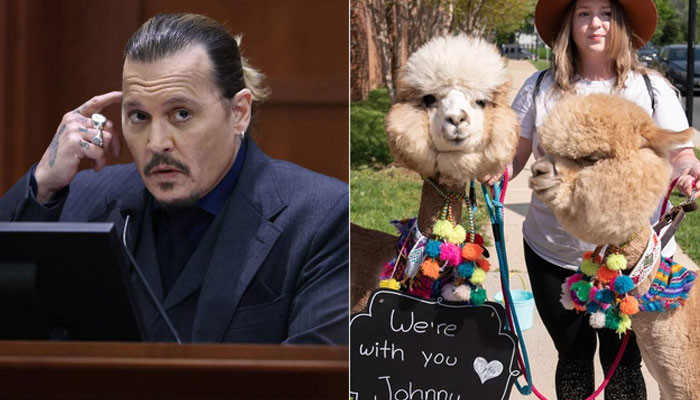 Fans have been gathering outside the courthouse in Virginia amid Johnny Depp and Amber Heard’s trial as they wave placard, shower gifts over the Pirates of the Caribbean star.

Amidst the massive crowd outside the court,  a few shepherd live alpacas have been spotted surprisingly.

What do alpacas have to do with the Johnny-Amber trial?

Alpacas were brought up in the infamous trial back when Johnny talked about his relationship with Disney and the famed Pirates of the Caribbean franchise that came to an end in 2018.

Johnny blames Amber and her op-ed piece which she penned for The Washington Post, allegedly accusing Johnny of domestic abuse on the Aquaman actor.

Whereas, Amber’s team tried to prove that Disney dropped Johnny for several reasons.

Her team has repeatedly mentioned Johnny’s quote in a previous deposition that was never played in court.

“The fact is, Mr Depp if Disney came to you with $300 million and a million alpacas, nothing on this earth would get you to go back and work with Disney on a Pirates of the Caribbean film? Correct?” Heard’s lawyer Ben Rottenborn asked Depp during cross-examination last month.

“Is Disney aware that Mr Depp has testified under oath that he would not take another Pirates of the Caribbean franchise role for $300 million and a million alpacas?”

Tina replied negatively to the question leading to Elaine asking a hypothetical situation whether Disney ever considered “paying Mr Depp more than $300 million and providing him with more than a million alpacas to be able to obtain his services for any future Pirates of the Caribbean role.”

However, fans have been extending their support to Johnny saying, “If Disney won’t bring you alpacas, we will.”