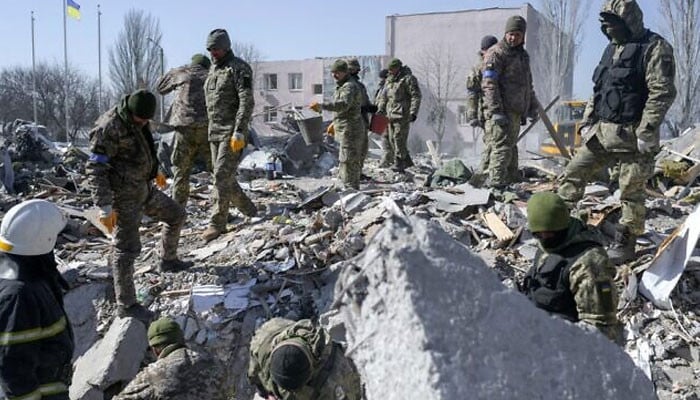 KYIV: Here are the latest developments in the war in Ukraine:

Top allies of Russian President Vladimir Putin say Moscow is ready for a prolonged conflict in Ukraine in order to achieve the Kremlin´s goals.

“We will continue the special military operation until all the objectives have been achieved,” Defence Minister Sergei Shoigu tells regional counterparts from the Russia-led Collective Security Treaty Organization.

Separately, the secretary of Russia´s Security Council, Nikolai Patrushev, says Moscow´s offensive will last as long as necessary and that “We are not rushing to meet deadlines.”

Budapest is unlikely to drop its opposition to an EU embargo on Russian oil soon and leaders should not discuss the issue at an upcoming summit, Hungary´s leader Viktor Orban tells Brussels in a letter.

Landlocked Hungary relies on Russian oil from a single pipeline and Orban insists the proposed sixth package of EU sanctions against Moscow would have a devastating impact on his country´s economy.

Orban later imposes a new state of emergency in the country, citing the challenges posed by the war in neighbouring Ukraine.

Russia´s parliament is to consider scrapping the upper age limit for signing up to join the army, in a sign Moscow may be looking to recruit more troops for its military campaign in Ukraine.

Under current legislation, only Russians aged 18 to 40 and foreign nationals aged 18 to 30 have the right to sign their first military service contract, but a draft bill could raise the limit.

“Highly professional specialists are needed to use high-precision weapons and operate weapons and military equipment,” says a note accompanying the draft bill.

The self-proclaimed leader of the Moscow-backed separatist region of Donetsk says Russian and separatist forces are fighting to take full control of the town of Lyman and have already captured half of it.

Lyman lies on the road to Sloviansk and Kramatorsk, the capital of the Ukrainian-controlled part of the region of Donetsk.

Russia is focused on securing and expanding its gains in the eastern Donbas region, near the border and home to pro-Russian separatists, as well as the southern coast.

Separately, the Ukrainian army announces that Russians are now in control of the town of Svitlodarsk, also in the Donetsk region.

The metro in Ukraine´s second city of Kharkiv reopens after months of use as a bomb shelter.

The Kharkiv metro, with 30 stations, has sheltered thousands of residents seeking to escape indiscriminate shelling on the city, which is adjacent to the Russian border.

A Moscow court orders the arrests in absentia of Russian bloggers Michael Nacke and Veronika Belotserkovskaya, accused of discrediting the army and its offensive in Ukraine.

Nacke, a 28-year-old Kremlin critic who tells AFP he is currently in Lithuania, hosts a YouTube channel with more than 700,000 subscribers where he discusses Russia´s military actions in Ukraine.

He says he risks up to 10 years in prison if he returns to Russia, adding his arrest is “part of the massive pressure on journalists and analysts who objectively describe the course of the current war”.