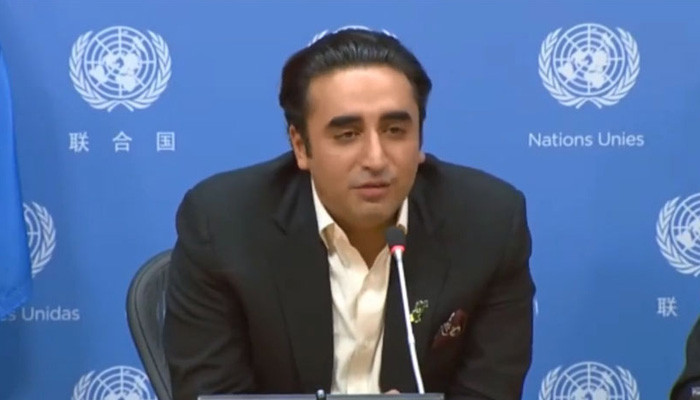 The foreign minister made these remarks during a press conference at the UN Headquarters after the conclusion of a two-day visit. Bilawal was invited by Secretary of State Antony Blinken to attend an international food security meeting.

The top Pakistani diplomat was asked about the February 24 visit of the former premier — the day Russia launched the offensive in Ukraine — and how the new government was going to “rectify the mistakes” of its predecessors.

Bilawal said: “As far as the former PM’s trip to Russia [is concerned], I would absolutely defend him.” He added: “[The] Pakistani PM conducted that trip as part of his foreign policy”.

The foreign minister said that no one knew that there would have been a Russia-Ukraine conflict.

“I believe it is very unfair to punish Pakistan for such an innocent action. Of course, Pakistan is absolutely clear as far as it comes to the principles of the UN of non-use of force and we stand by these principles,” he said.

The FM went on to say that Pakistan is not a part of any conflict and never wishes to be. “We will continue to emphasise the importance of peace, dialogue and diplomacy to resolve this conflict as soon as possible,” he said.

“We will certainly not take the side of any aggressor within this context,” said Bilawal, adding that Pakistan has its problems and has witnessed a decade of conflicts in Afghanistan.

The FM said Pakistan is now tired of this war as it has sacrificed its children, leadership, men and women. “Therefore, we think that through using tools of dialogue and diplomacy we can solve many problems”.

In response to a question about the former premier, FM Bilawal lambasted Imran Khan over his “undemocratic and unconstitutional politics”.

“Imran Khan is not doing democratic, parliamentary and constitutional politics, however, he is heading towards politics of extremism,” said Bilawal.

He said it is the Opposition’s right to protest, but Imran Khan is levelling false allegations against political rivals and institutions.

Bilawal Bhutto added that if they revealed the way Imran Khan’s government was formed and ruled, he [Imran Khan] would not find a place to hide.

“Therefore, Imran Khan should play the role of a responsible Opposition member, otherwise he will have to [give] answer[s],” said Bilawal, adding that those involved in the crime of bringing Imran Khan to power will have give answer too.

Bilawal said that the new government of Prime Minister Shahbaz Sharif should be given a chance to solve the country’s issues.

“We need to find out the solution to issues while working together with every stakeholder and party,” he said.