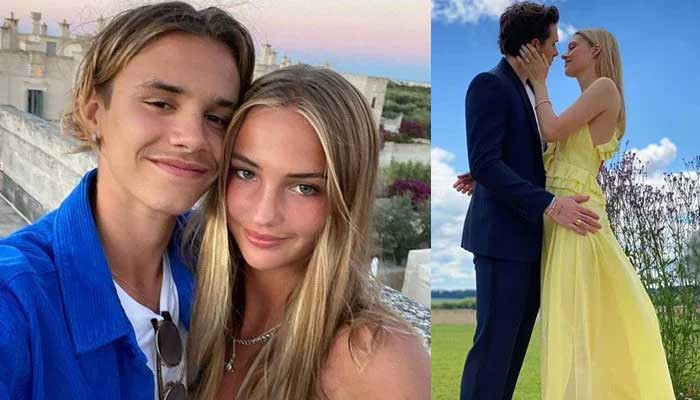 Rumours have been rife that there is tension between Brooklyn’s wife Nicola Peltz and Romeo’s girlfriend Mia Regan.

There are also speculations that the two  stunners are not  on the same  page as they have not pictured together yet.

Peltz and Regan, who rarely acknowledge each other on Instagram, have spent time together on family occasions, most recently at Brooklyn and Nicola’s wedding in Palm Beach last month.

Regan, 19, and Peltz, 27, have different careers and aspirations, which would be why they do not see eye to eye with one another.

Brooklyn’s sweetheart  has made her name for herself in the acting world, and is best know for her role as Bradley Martin in Bates Motel, and also landed roles in 2010’s The Last Airbender, 2014’s Transformers: Age of Extinction and 2020’s Holidate. She moved behind the camera for her latest movie, Lola James, which she wrote and directed as well as starring in.

While, Romeo’s darling is signed with the prestigious Storm Models, who describe her as the ‘quintessential millennial muse with a unique Gen-Z approach to fashion and beauty.’ Mia has worked with a number of luxury brands such as Balmain, Gucci Beauty and British Vogue, as well as modelling for the VVB collection, Victoria Beckham’s brand.

According to Mail Online, billionaire heiress Nicola has a net worth of $50 million. Her father Nelson Peltz is one of the wealthiest people in the country and has approximately $1.8 million in the bank, yet Nicola’s net worth comes from her movie roles.

There are conflicting reports surrounding Mia’s net worth, which is estimated to be between £600,000 and £1 million, owing to her modelling campaigns and adverts.

However, David Beckham and Victoria Beckham are quite happy and spending quality time with their family.