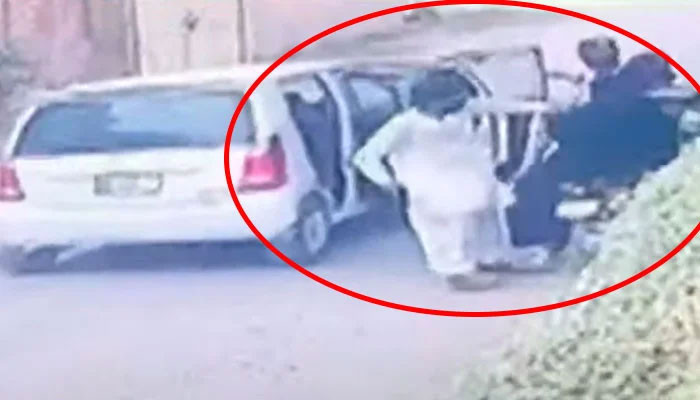 LAHORE: With just minutes left in the expiry of Lahore High Court’s (LHC) deadline, the court was informed on Sunday that the student, who was abducted by her former fiancé from Lahore’s Shadbagh area, has been recovered from Arifwala.

LHC Chief Justice Muhammad Ameer Bhatti had taken notice of the incident after the video of the kidnapping incident had gone viral. He had given a 10pm deadline to IG Punjab Rao Sardar Ali Khan and Lahore Capital City Police Officer (CCPO) Bilal Siddique Kamyana to ensure the safe recovery of the girl.

“The girl has been recovered. I have spoken to her,” Additional Advocate-General (AAG) Punjab Jawad Yaqub informed LHC CJ when the hearing resumed at 10:30pm.

Upon hearing this, Justice Bhatti asked the father of the girl — who was present in the courtroom — whether he had spoken to his daughter. He replied in the affirmative.

The LHC CJ then informed the father that the girl was being transported back to Lahore by the police and directed the law enforcement agency to ensure that the student was protected.

“The case should be investigated at the earliest,” Justice Bhatti directed the IG Punjab. While issuing the directives, the LHC CJ also informed the province’s top cop that the recovery of the girl was as much of an honour for him as it was the police department’s.

“I am wrapping up this suo motu notice. Thank you, everyone,” said Justice Bhatti.

Punjab CM Hamza thanked the police for their efforts in ensuring the “safe recovery” of the girl, adding that the suspects would be punished according to the law.

“We will fulfill all the requirements of justice in the case. The accused do not deserve any concession,” said the CM.

On the other hand, the police told Geo News that Abid and Ilyas, who are suspects in the case, have been arrested. They added that they were bringing the girl to Lahore with the investigation team.

CCPO Kamyana, while addressing the media after the case, confirmed that the suspects had kidnapped the girl after she had broken off the engagement.

He added that the police were unable to recover the victim quickly as the suspects had switched off their phones soon after committing the crime.

Recover girl by 10pm of will asks PM to remove IG, CCPO

LHC CJ Bhatti had directed IG Punjab Khan and Lahore CCPO Kamyana to recover the girl abducted from the provincial capital, earlier today, by 10pm or he will ask Prime Minister Shehbaz Sharif to remove them from office.

The LHC CJ had taken notice of the incident and directed the police to make sure the girl was recovered and presented before the court by 6pm today. However, their failure to ensure the recovery of the victim led the LHC’s top judge to hold a hearing of the case at 8pm.

Justice Bhatti had issued the directives for the recovery of the girl via the registrar of the court earlier today.

When the LHC CJ held the hearing, AAG Punjab Jawad Yaqub appeared before the judge and requested him to make sure that details of the hearing and case was not reported in the media.

At this, Justice Bhatti responded that it was the government itself that was giving the case details to the media.

“What is the progress? He took the girl and you (police) were sleeping,” remarked the judge. He warned CCPO Kamyana and IG Khan that he would tell PM Shehbaz to remove them from office as they were “incompetent”.

At this, the AAG asked the judge to give the government two hours for the recovery.

However, this irked the LHC CJ and he slammed the officials for asking time and told the government lawyer that he was only worried about his job.

“The girl has reached Sahiwal. How can the girl stay out at night, if it’s your daughter will you be able to sleep at night?” asked Justice Bhatti. He reminded the officials that the court had not opened at nighttime only to delay the case further.

The judge asked the officials whether the abducted child should “spend the night out”, adding that the police were “sitting” idle despite the registration of the complaint.

“If the girl is not recovered by 10pm, I will ask PM to remove police officers remove their posts,” remarked Justice Bhatti before adjourning the case till 10pm.

Earlier today, a video of a girl getting kidnapped had gone viral on social media. The kidnapping had occurred a day earlier (Saturday) in the Shadbagh area of Lahore.

After the case grabbed attention, the police shared that the 17-year-old student studying in the 10th grade was the victim in the case and was kidnapped by her former fiancé, Abid.

According to the police, the girl was going with her brother to appear in an exam when four unidentified men kidnapped her. They added that a case was registered against the abduction.

After registering the case, the police said that they had arrested 13 people, including the suspect’s parents and the facilitator in the case.

The law enforcement agency identified the facilitator as the person who supplied the pistol to Abid. They had also shared that the kidnappers had taken the abducted girl to Kasur.