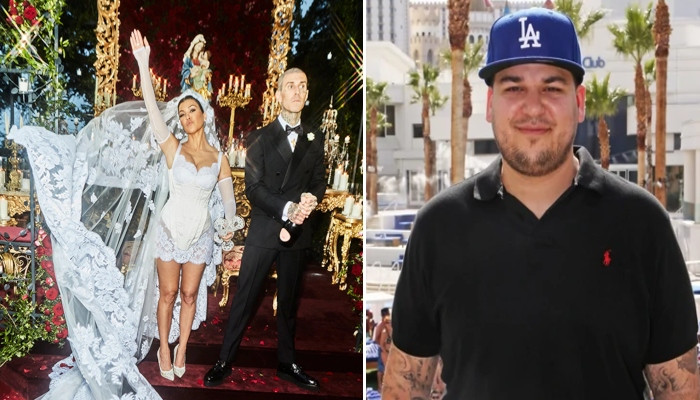 Kourtney Kardashian and Travis Barker made it officially official!

The lovebirds tied the knot for a third time in a lavish wedding ceremony on Sunday evening in Portofino, Italy.

The Poosh founder, 42, and the Blink-182 drummer, 47, kept things traditional for the ceremony and invited a small number of guests, including some of their closest family and friends.

While the Kardashian-Jenner family members, including Kris, Kim, Khloe, Kendall, and Kylie, made it to Kourtney’s wedding, her brother Rob was completely out of the sight.

Rob, 36, who has stayed away from the spotlight in recent years, was absent from Kourtney’s lavish wedding ceremony.

It was previously reported that Rob has distanced himself from the limelight due to mental health issues surrounding his weight.

While it is still unclear whether Rob made it to the service, fans of the Kardashian-Jenner family missed Rob’s presence at the wedding.

Fans also recalled that Rob had also been absent from his sister Kim’s wedding to her then partner Kanye West, which took place in 2014.

He explained, “I was doing my suit fittings in Paris right before the wedding and I just wasn’t comfortable. I’m 6’1 and I probably weighed 300 lbs.”

“There were cameras at the airport on our trip there and I was very unhappy with the person I saw in all the pictures. I’m upset I missed my sister’s wedding but it was a personal decision,” he revealed.