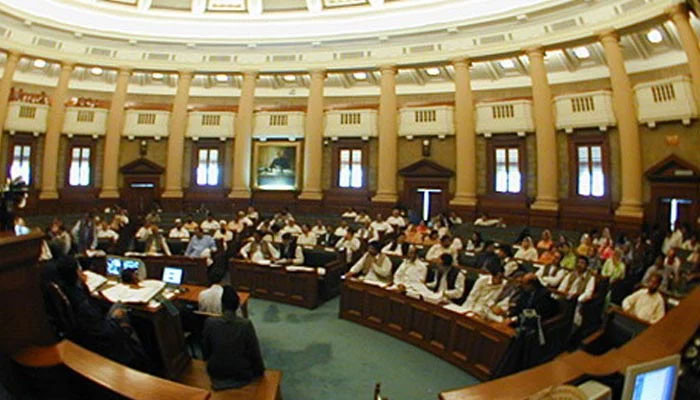 LAHORE:  After hours-long delay, the crucial session of the Punjab Assembly with the no-confidence motions against the speaker and deputy speaker on the agenda has been postponed till June 6.

Given the dramatic change in the numbers game in the PA after the Election Commission of Pakistan’s decision to de-seat the dissident PTI MPAs, Elahi called the assembly meeting just on the notice of one day.

The PTI and the PML-Q, two opposition components in the PA, jointly form the strength of 168 (158 of PTI and 10 of PML-Q). If the vote of Mir Dost Muhammad Mazari, the deputy speaker who is supporting the PML-N now, is considered minus from the PTI tally, the joint PTI and PML-Q strength could reduce to 167.

Hamza Shahbaz, if asked to prove a majority in the House, needs to win the election even by a margin of one vote and does not have to prove the 186 members figure, as it would be the second round of the CM election. The PML-N has a total of 166 MPAs, but five of its members are dissidents. With the safe support of 161 MPAs now, Hamza earns the support of seven PPP MPAs and four independents as well as one from the Rah-e-Haq Party, which takes the present treasury benches strength to 173.

Earlier, the security team of Punjab Chief Minister Hamza Shehbaz was barred from entering the House. Meanwhile, PML-N leader Ata Tarar said that MPAs and media were not allowed to enter the provincial assembly.

“Speaker Pervaiz Elahi has brought goons from Gujrat,” he claimed, adding that “some people” were brought to the House yesterday night.

“You [Pervaiz Elahi] are disrespecting the House,” the PML-N leader added. He said they would enter the assembly accompanied by media persons.

He maintained that they have submitted a no-confidence motion against the speaker as per the Constitution and vowed to challenge the speaker’s “illegal actions” in court.

Responding to a question, the PML-N leader said that the ECP has not de-notified the 25 defiant lawmakers of the House so far.

The police raided his house at around 3:30 am and shifted him to an unknown location after taking Mumtaz into custody, said his family.

The Punjab Assembly spokesperson confirmed the reports of Mumtaz’s detention, saying that the police leaped the walls of the DG’s house. He said that the houses of PA Secretary Muhammad Khan Bhatti and Coordination Secretary Inayatullah were also raided.

The spokesperson further stated that they also have video evidence of the raids on assembly official’s residences. He also accused police of vandalism during the raids.

Sources privy to the matter said that Rai Mumtaz has been arrested in a case registered against him by PML-N MPA Muhammad Ashraf Rasool.

Condemning the raids and the arrest, Chaudhry Pervaiz Elahi said that every action is being taken at the behest of Prime Minister Shehbaz Sharif. He termed the arrest and raids a “fascist action” by the government.

“The arrest of an assembly official and raids is a proof that the government is panicked. The face of the Sharifs is being exposed before the nation,” Elahi said.

He said that the government is revealing new tactics after violating the sanctity of Parliament, as he referred to the Punjab Assembly ruckus during the election for the chief minister. The government is taking unconstitutional steps, he added.

Elahi, while referring to PM Shehbaz Sharif and Punjab Chief Minister Hamza Shahbaz, said “the father-son duo are doing this to the assembly because they have less numbers.”

He questioned how he could assume charge as the Punjab governor when Omar Sarfaraz Cheema still serves the post. He said that he is still a candidate for the CM’s slot.

Despite the security situation around the PA, the speaker urged the MPAs to reach the assembly by 12.

“The assembly will surely meet today. Let’s see who stops the elected MPAs from entering the assembly,” Elahi said, adding that they will face the government’s fascism firmly.

He said that all MPAs will attend the session as no one can stop the elected representatives from going to the assembly.

Meanwhile, PTI leader Musarrat Jamshed Cheema said that there is lawlessnes in the country and no one is safe here. She said that the PML-N is in the government to close all the cases against its leaders.

Keeping the intensifying situation in the provincial politics in mind, the police has been directed to stay on high alert and a heavy police force was deputed in the surroundings of the provincial assembly.

The administration closed the doors of PA while barbed wires were placed in front of the assembly building. Punjab assembly staff said that even they are not allowed to enter the assembly.