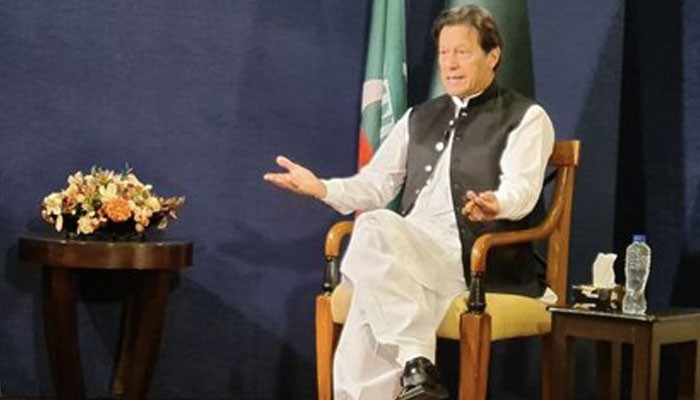 ISLAMABAD: Reacting to the Masjid-e-Nabvi incident, former prime minister Imran Khan termed it a “public reaction” and said that it was a “consequence” of their deeds.

On Thursday, a group of Pakistani protesters violated the sanctity of Masjid-e-Nabvi in Madina when they chanted slogans against Prime Minister Shehbaz Sharif and his delegation as soon as they entered the holy mosque to pay their respects at the Roza-e-Rasool (PBUH).

Following the incident, the political and religious leadership of Pakistan and others from different sections of society vehemently condemned it.

Speaking on the matter after keeping mum for more than 24 hours, Imran Khan said that in the history of the country masses have never reacted in such a manner.

“We are not asking the people to come out, it’s the public themselves coming out to protest as they are in pain and anger, however, I can challenge they [the rulers] won’t be able to show their faces in any public place,” he added.

“A bunch of crooks is imposed on Pakistan and NRO II is given through foreign conspiracy, therefore what happened at Masjid-e-Nabawi was a result of their deeds,” he said.

The PTI chairman said when the incident took place the PTI workers all around the world were busy in Shab-e-Dua.

“Neither can I think of inciting the people to hooliganism at Masjid-e-Nabvi nor can a true lover of Prophet Mohammad (PBUH) think of doing this,” he said.

“The place I have in my heart for Prophet Mohammad (PBUH), I don’t need to prove it, and I have raised my voice around the world against islamophobia,” Imran Khan said, adding, “I believe that iman [faith] cannot be completed until you love Prophet (PBUH).”

Director of information at the Saudia Arabia Embassy in Islamabad, had also confirmed that some Pakistani nationals have been arrested for violating the sanctity of Masjid-e-Nabvi and an investigation has been launched into the matter.