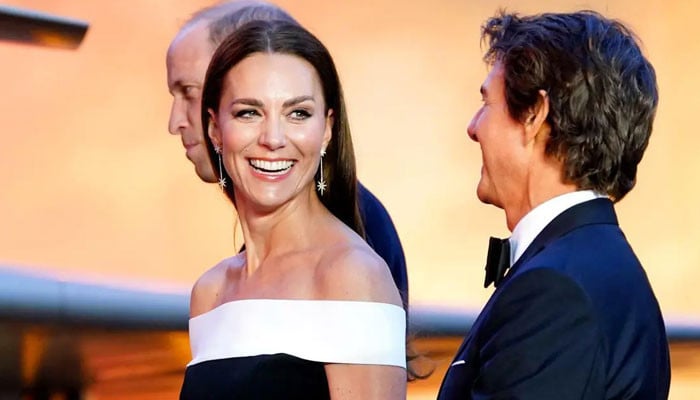 Judi James reveals the Duke of Cambridge became the second fiddle to Kate Middleton and Tom Cruise’s party of two.

She began: “As William was sweetly climbing into his fan-boy shoes complete with embroidered, Top Gun-style jets for the film’s premiere, did it ever cross his mind that he might end up spending a few minutes playing second fiddle on the red carpet as his wife was escorted by the iconic Tom Cruise, even placing a hand in a clasp over his as he offered it in a very gallant way as she climbed the stairs in her stunning, figure-hugging sheath dress?

“For a minute they looked like a pair of glittering A-list celebrities posing there together to plug their new movie.”

Speaking to the Mirror, Ms James said: “From the moment Kate had spotted Tom she’d engaged in very animated conversation with him, suggesting she’d been busting to chat.

“As she hit him with the full force of her dazzling smile it was possible to see William in temporary ‘retreat’ mode, sucking his lips in and lifting his hand towards his bow tie in a look of good-humoured submission.

“Whether the handclasp met royal protocol rules or not it was perfectly performed, without any hesitation or look of query from Kate.”

She added: “She oozed confidence in one of her most stunning looks to date, although she did veer to William’s side again once the introductions were all done, letting him go back to looking like Tom’s biggest fan as it was his turn to chat to the star instead.”

Top Gun Maverick releases in UK and Ireland on May 27.