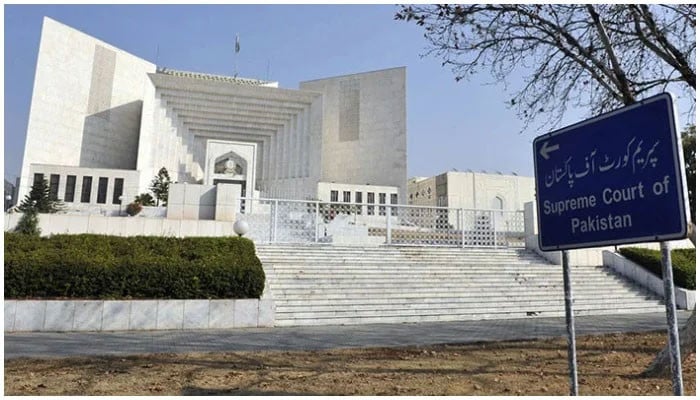 ISLAMABAD: The Supreme Court of Pakistan on Thursday stopped the government from making new appointments, transferring and postings officers relating to the high-profile cases.

A five-member bench of the top court headed by CJP Umar Ata Bandial issued the order while hearing a suo motu case relating to “perceived interference” by “persons in authority” in the investigation and legal proceedings of criminal matters against the government officials.

A day earlier, CJP Bandial took the suo motu notice of the perceived apprehension of “persons in authority” undermining the criminal justice system.

At the outset of today’s hearing, Chief Justice Umar Ata Bandial expressed concerns over transfers and appointments of officials in high-profile cases and refrained the prosecution from withdrawing such cases.

The chief justice noted that several officers were transferred from NAB Lahore and FIA, adding that the FIA’s prosecutor in the Lahore High Court was also replaced. The court further maintained that DG FIA Sanaullah Abbasi and director Rizwan were also replaced.

Referring to Chief Minister Hamza Shahbaz’s case, CJP Bandial mentioned that the DG FIA barred one of the investigation officers from appearing before the court.

“Nobody should interfere during the investigation and in the affairs of the prosecution branch,” the chief justice told the attorney-general.

Justice Bandial remarked that such practices affect the rule of law in the country. As per the Constitution, the SC is responsible to maintain peace and an atmosphere of trust in the society, said the chief justice.

While referring to recent developments in cases related to the prime minister and Punjab chief minister, Justice Ijazul Ahsan stated that FIA declared it “routine matters”.

At this, the CJP hoped that the government will cooperate in explaining the steps. As per the media reports, NAB’s record about the criminal cases has started going missing, he said, adding that the watchdog’s record in at least 4 cases went missing. Meanwhile, the top court issued notices to provincial prosecutor generals.

Regarding a change in the policy related to the removal of names from the exit-control list (ECL), the chief justice mentioned that according to news stories published in leading newspapers 3,000 people will benefit from the policy change.

CJP Bandial asked attorney-general regarding the new policy and its beneficiaries. “The court wants to know about the changes in the policy of ECL and how will the people whose names are there on the list will be benefitted,” he said.

“The system faces internal and external threats,” he stated.

The Supreme Court further asked the authorities to share the names of those individuals who have been removed from the ECL in the last six weeks, adding that if the policy has been changed then the apex court should be informed.

“Our investigation aims to serve justice while maintaining the dignity, honour and respect of the investigation process,” CJP Bandial said, adding that investigation is not for point-scoring.

‘We are not afraid of criticism’

“We are accountable to Allah and the Constitution,” the chief justice said, adding that they will not be influenced by any kind of criticism.

He maintained, “We are not afraid of criticism and do not need praise.” The CJP said that they wanted the provision of justice to the people.

Talking about the “strong” social media cells of the political parties, the chief justice said that they have been observing it silently. He warned that nobody should try to play with the judicial system.

During the hearing of the suo motu case, the SC larger bench barred the NAB and FIA from withdrawing any case till further order.

Meanwhile, the SC also sought a reply from the government over transfers and postings in NAB, FIA, investigation and prosecution departments.

The apex court directed the attorney general to provide the record of transfers and postings made during the last six weeks in NAB and FIA.

Referring to the media reports about the missing record, the top court ordered to submit a report about the steps relating to the safety of the record. It was ordered to check the record of high-profile cases with the NAB and the FIA and submit the report to the competent authority.

CJP Bandial ordered the concerned authority to seal the record of the prosecution.

Later, the hearing for the case was adjourned till May 27.