HomePAKISTAN'Nothing but respect for her,' Khawaja Asif apologises for raid at Justice...
PAKISTAN

‘Nothing but respect for her,’ Khawaja Asif apologises for raid at Justice (retd) Nasira Iqbal’s house 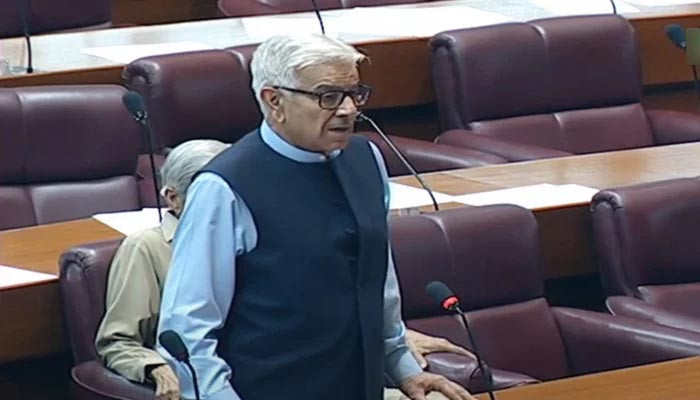 ISLAMABAD: Following the raid at the residence of Justice (retired) Nasira Iqbal,  Defence Minister Khawaja Asif on Tuesday noted that the government had nothing but respect for her, offering his apologies.

After PTI Chairman Imran Khan’s announcement of the Azadi March towards Islamabad, the Punjab Police raided the houses of several PTI leaders late Monday night. It also included the house of  Senator Walid Iqbal who is the son of the retired judge.

Per the reports, the gate of the retired judge’s residence was broken during the raid.

Justice (retd) Iqbal released a video statement after the incident and said that a team of eight police officers raided the residence at 2am and broke their entrance gate.

“They just came to see whether Walid Iqbal was at home or not. Neither did they have a warrant, nor had [Walid] committed a crime. But despite this, they entered our house by force. This happens in a society where dacoits are in power,” the retired judge, the daughter-in-law of the poet of the nation, Allama Iqbal, said.

In his speech during the National Assembly session, the defence minister apologised for the excessive use of force during the raid at the retired judge’s residence.

“But I want to say this with the utmost respect that condemnation should not be selective. It should be above party lines,” Asif said, noting that despite Justice (retd) Nasira’s son being a member of the PTI, he condemned the raid.

The defence minister added that if a political worker repeats the same language as their leader, then they negate their political identity. “A political worker does not use words such as jalao gherao (vandalism).”

The defence minister’s statement comes as the political tensions in the country heightened after the federal cabinet decided not to let PTI go ahead with its long march in order to avoid the spread of “fitna” and “fasad“.