HomeENTERTAINMENTKourtney Kardashian to walk down the aisle to dramatic ‘Ava Maria’: Source
ENTERTAINMENT

Kourtney Kardashian to walk down the aisle to dramatic ‘Ava Maria’: Source 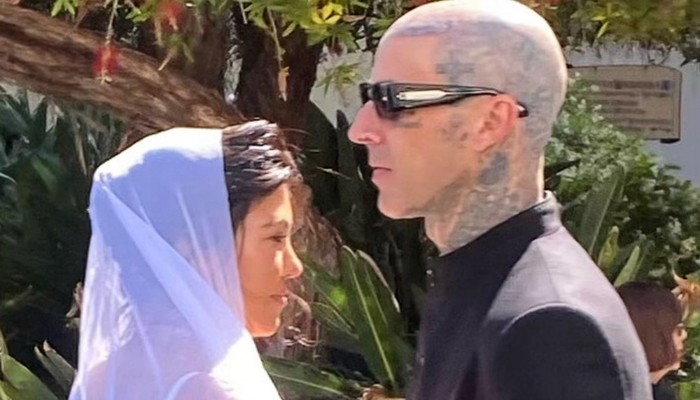 Kourtney Kardashian and Travis Barker are set to tie the knot today at a scenic Italian castle in Portofino, with The Daily Mail exclusively reporting that the bride will walk down the aisle to Ava Maria!

The outlet gained exclusive access to last-minute touches and rehearsals for the highly-anticipated ‘Kravis’ wedding, and reported that the couple will be wed in a garden grotto at a medieval castle in Portofino.

According to Daily Mail, a fake blonde bride was spotted playing the role of Kourtney as she walked into the garden with a long green plastic sheet on her head instead of a long veil.

Ave Maria, sung to Franz Schubert’s 1825 melody, was heard playing out as the fake bride made a dramatic entrance.

Two men, appearing to be playing the role of bridesmaids, were seen holding the train from the back, and some more men were stationed holding lace umbrellas over the ‘bride’ as she made her entrance.

The Daily Mail earlier revealed that Kourtney and Travis’ wedding is set to take place in the garden grotto that is next to Castello Brown, a castle hired by the Kardashians for the celebrations.

As for ‘Kravis’, today’s ceremony will serve as their official wedding and comes about a month after they had a small ‘runaway’ wedding after the Grammys and then legally tied the knot last Sunday in Santa Barbara, California.