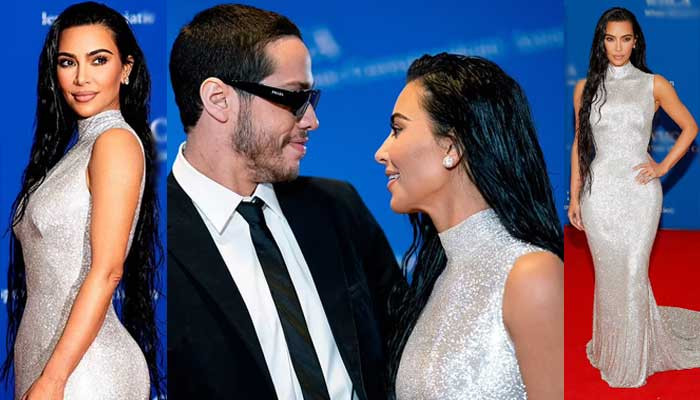 Kim Kardashian looked ethereal in a curve-clinging rhinestone gown as she and her boyfriend Pete Davidson put on very Public display of affection at the White House Dinner on Saturday.

Kim Kardashian, 41, stole the limelight as she rocked rhinestone-covered Balenciaga gown that clung to her famous curves. She looked out of this world in stunning dress, attracting massive applause from fans and friends.

The mum-of-four’s eye-popping gown had a chic mock neckline and a modest train that pooled at her feet as the reality star posed confidently beside the SNL star.

Kanye West’s ex cascaded her raven tresses down her back and chest in wavy strands for an ultra glam look. She had a pair of chunky diamond stud earrings in her ears and rocked a classic nude manicure for the evening.

She gave herself a sultry stare with an array of brown and black eyeshadows. Kardashian’s plump pout was painted a glossy nude shade and her cheeks were doused with vibrant peach blusher.

Pete and Kim, who began dating in November of last year, stood close to one another while posing for snapshots ahead of the star-studded event. The comedian had one arm wrapped around Kardashian’s waist during their time on the red carpet.

Kim Kardashian’s much younger beau Pete, 28, looked equally dashing in a classic black Prada suit styled with a white dress shirt and a skinny black tie. The Staten Island native gave his ensemble an edgier vibe by opting for a pair of black lace-up Vans sneakers instead of classic leather dress shoes.