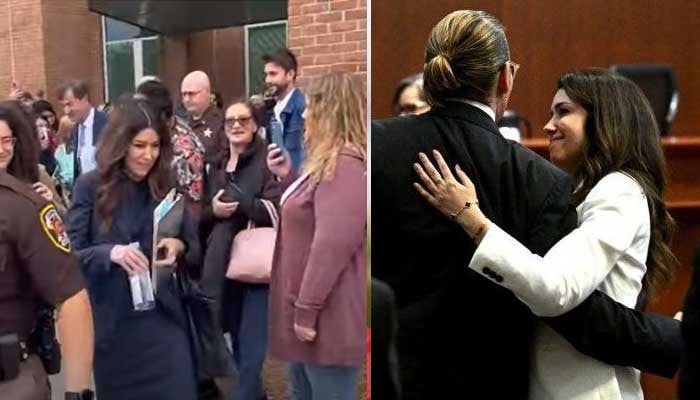 Johnny Depp’s attorney Camille Vasquez, who has become a celebrity for his sweet gestures during  proceedings   in the Fairfax County courtroom, received hero’s welcome on Tuesday.

Depp’s lawyer  received praise as she  left the court on Tuesday. Dozens of  Depp’s fans showered love on the lawyer.

Camille has also been lauded for her efficient cross-examination of Heard, regardless of the outcome of the trial. Her constant objections to the Aquaman actor’s attorney Elaine Bredehoft’s line of questioning also left Bredehoft visibly flustered.

You tube viewers also expressed their love and respect for the lawyer, with one wrote: “A star is born. Camille is very lady like. Love to see her Latino fans there supporting her along with the rest of the ladies that seem to have been charmed by Ms. Vasquez’s elegance. Finally, a role model for American girls to admire and respect.”

Another responded: “I am just amazed how people from all over the world unites to support Depp. I hope he will back to acting career after the trial.”

The third one penned: “Love this. She deserves fame after this. Beautiful woman.”

Camille Vasquez  became a TikTok star instantly as video of her hug to the Pirates of the Caribbean star took the social media platform by storm. Her another video of super-quick objections to Amber Heard’s lawyer Elaine Bredehoft has crossed nearly 31 million views on TikTok.