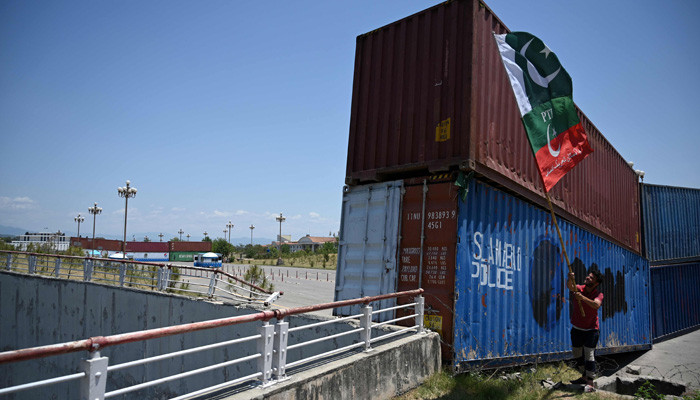 LAHORE: In a bid to deal with the PTI’s Azadi March and maintain the law and order situation in the country, the federal government has decided to deploy the army in Islamabad’s Red Zone while the Punjab and Sindh governments have imposed Section 144, it emerged Tuesday.

The decision to ensure the safety and security of the masses came after a policeman lost his life during a raid at a PTI leader’s residence.   Constable Kamal Ahmad embraced martyrdom in Lahore’s Model Town last night after an unidentified person opened fire on him, DIG Operations Lahore Sohail Chaudhry said.

The police launched a crackdown in Punjab cities and Karachi late on Monday ahead of the PTI’s May 25 Azadi March during which several lawmakers were arrested.

Talking to journalists in Lahore, PML-N leader Atta Tarar said that the decision to impose Section 144 was made after receiving reports that armed groups will take to the streets in Lahore tomorrow. He said a police constable was martyred by the activists of the party.

Meanwhile, sources in the provincial home department said that all the roads leading to Islamabad have been blocked.

The exit and entry points in all the districts have been blocked to stop the PTI workers from holding the long march towards Islamabad.

Transport service between Punjab and Islamabad has been suspended, the sources said, adding that the transporters have been directed not to give their vehicles to the participants of the long march.

In the light of the IG Sindh’s report that some political and other disgruntled elements are planning to trigger the acts of unlawful assembly with an intent to block roads, highways and organization of sit-ins disturbing the smooth and peaceful life of a common man, the provincial government has decided to impose Section 144 for a period of 30 days.

“The government of Sindh, in the exercise of the powers conferred under Section 144 (6) Cr.PC, do herby imposes ban on assemblage/ gathering of five or more people, staging of, demonstrations and rallies throughout the province of Sindh for a period of thirty days with immediate effect,” read the notification.

Shortly after the government’s decision to stop the ‘Azadi March’, the Interior Ministry decided to call in the Pakistan Army for the security of the Red Zone in Islamabad.

According to the sources, the army personnel will be stationed at the PM House, the Supreme Court and other sensitive government buildings in the area.

All security arrangements will be handed over to the army, the sources said.

Meanwhile, Section 144 has also been imposed in the federal capital for two months. According to a notification, the restrictions have been extended up to one kilometre of the Red Zone.

Earlier in the day, the federal government decided to stop the PTI from holding a long march in Islamabad to ensure the safety and security of the masses.

The decision was taken during a meeting of the political committee chaired by Prime Minister Shahbaz Sharif during which the latest situation was reviewed amid PTI’s protest call.

Speaking on the occasion, PM Shahbaz Sharif said such tactics [Azadi March] are tantamount to damaging the economy and would affect the daily wagers as well.

During the meeting, the government decided that no compromise will be made on the state’s writ and that every illegal activity will be stopped.

“The law will take its own course against any kind of violence or provocation and the Supreme Court’s order regarding the sit-in will be implemented,” according to the details of the meeting.