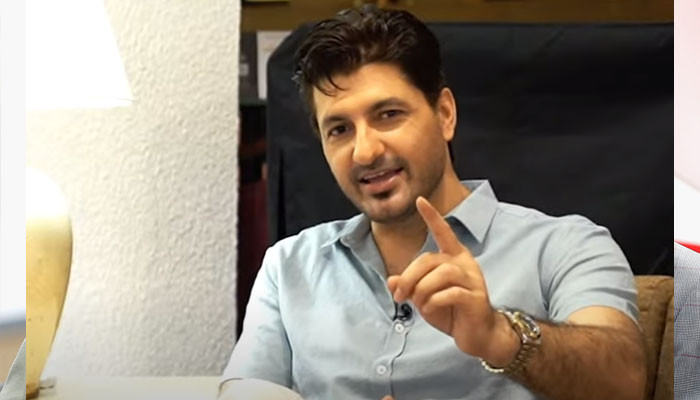 Ghabrana Nahi Hai is gearing up to hit silver screens this Eid-ul-Fitr.

Ahead of the release of the film, actor Syed Jibran sat down for an exclusive interview with Geo TV as he spoke of the buzz and excitement around the project.

At the beginning of the interview, the actor was quick to set audience expectations from the movie, declaring the project is one of its kind in Pakistan.

“Working in this film has undoubtedly been one of the finest experiences of my acting career. Audiences have never seen me like this on TV and I can assure you it is going to be a big surprise for my fans,” confessed Jibran.

He added: “My character has the sole responsibility of providing entertainment, laughter, comedy and all the elements of fun. It has been very challenging for me. I wanted my performance to be different this time owing to the aura and the charm of silver screens.

Speaking about his experience of working with leading lady Saba Qamar, Jibran heaped praises on the star’s acting prowess.

“Saba is an international star and she has time and again proven that she can take on any role and do justice to it. In this film too, Saba’s character is very feisty. It is a story of a woman who strives to prove herself and Saba essays the role beautifully.

Noting the originality of the plotline, Jibran confessed it was the script that made him instantly say yes to the role.

“The script was fantastic! It has been penned by Mohsin Ali and co-written by the director Sakib Khan himself. It was so beautifully written, I knew letting the film go would be a sin, ” he quipped. “The basic original idea of the film, the journey of the film is so pure, I was just awestruck.”

However, the most exciting element about the project for Jibran was perhaps the action and dance sequences.

“I studied acting in Bombay. In 2008, I flew across the border for a special course to hone my action and dance skills. This made me enjoy the film thoroughly,” admitted Jibran.

Reiterating the message of the movie, he spoke of societal gender roles and stigmas around women in Pakistan.

“The movie is about woman empowerment. You cannot ask a woman to step back from her dreams and ambitions just because of her gender. This is a wrong concept. Always encourage women around you and support them to break barriers,” he asserted.

Before officially signing off, the actor promised his fans ‘wholesome’ entertainment, claiming the movie is the right choice for their Eid celebrations.

“The movie is wholesome entertainment. You would never once feel uncomfortable while watching the film with your family. It is a complete family package. You will enter the theatres smiling and leave in splits,” said Jibran.