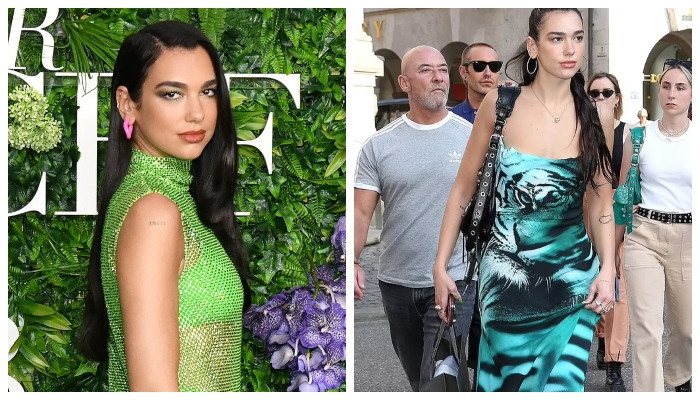 The New Rules singer has been city-hopping Europe this month for her Future Nostalgia tour.

And Saturday’s destination was Munich, Germany, as Dua enjoyed some shopping time ahead of her show in the city on Sunday.

The 26-year-old looked like a fairly as she nailed a gothic chic look in a figure-hugging turquoise midi dress, which featured a large tiger print.

She paired the asymmetrically hemmed dress with black, pointed-toe boots which seemingly went up to her knees.

Dua rested a small black handbag over her shoulder, clutching a grey shopping bag as she strolled through the city.

To accessorise she sported a pair of silver hoop earrings and a complementing necklace, alongside an array of rings on each hand.

The singer’s raven locks were pulled away from her face into a half bun, as the underpart was left to flow in a soft crimp.

The London native kept her makeup very subtle for the outing, showing off her glowing complexion.

Dua showed off her range of tattoos with the ensemble – including one of a barbed-wire heart on her arm.