HomePAKISTANDon't bow your heads before thieves and robbers, Imran Khan says during...
PAKISTAN 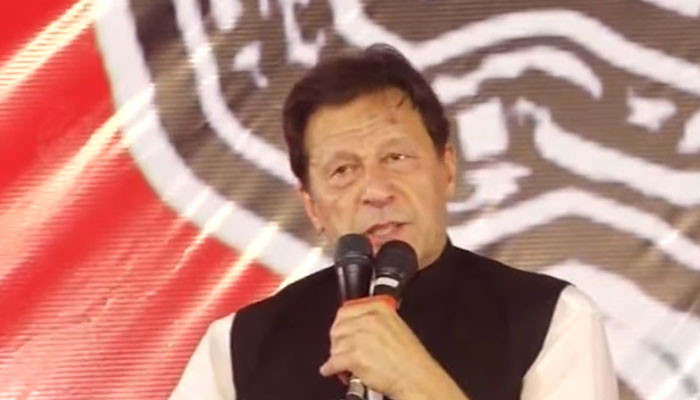 PTI Chairman and former prime minister Imran Khan on Friday said that Pakistan could never become a great nation unless it gets rid of the chains of slavery.

Addressing a rally in Multan, the former premier once again criticised the coalition government, particularly the Sharif family, and asked the masses “not to bow your heads before thieves and robbers”.

At the beginning of his speech, Khan thanked the people of Multan for welcoming him to the city and said: “I pray to Allah to awaken the conscience of this nation.”

The PTI chairman has been holding a series of rallies in different parts of the country to gear the masses up against the incumbent government as he demands fresh elections in the country. The Multan rally would be his last public rally before the party starts its long march to Islamabad.

Speaking about the long march, Khan said that he will announce the date for the long march between May 25 to 29 but did not provide a specific date.

He went on to say that no revolution in the world could succeed if the youth and women of a country do not participate in that.

The former prime minister said that corrupt leaders had been ruling the country for the last 30 years but they could not make a difference as they were busy looting the country. He then reiterated how his government was toppled through a US-backed conspiracy.

The former prime minister said that fear of losing a job and humiliation “makes a big man into a small one” and added that till the shackles of such fear are not broken, the country will not turn into a great nation.

The PTI chairman added that Prophet (PBUH) helped Muslims break those shackles and helped them rule the world. To give more examples he explained that no one turned into a big businessman till he feared losses, no soldier has gotten medals in fear of death.

Khan said that when Edmund Hillary decided to climb Mount Everest he first conquered his fear. Similarly, the “corrupt” rulers imposed on the country have imposed this fear that till we do not polish America’s boots we cannot progress, he added.

The PTI chairman deplored that the country, unfortunately, got rulers that mostly bowed down before the US. He added that this bought bad repute to the country.

Khan continued that the Opposition, during his premiership, tried to conspire against him so that he is forced to forgive their corruption cases and give another “national reconciliation order” (NRO).

“If I would have forgiven their cases then this would mean that I did not come to power based on an ideology or to run a movement for justice. It would have meant I came to do politics over a seat just like Gen Musharraf forgave them to save his seat,” said the PTI chairman.

Turning his guns towards his arch-rival PML-N, the PTI chairman asked his supporters if they have ever wondered how a “jackal” could become a leader.

Khan, while citing the example of PPP Co-chairman Asif Ali Zardari, said that when former dictator Musharraf put Nawaz Sharif in jail, he kept crying throughout his captivity.

The former prime minister said that his government was told that Nawaz was “very ill” when he was jailed, adding that many people — including former human rights minister Shireen Mazari — urged him to send the PML-N supremo abroad for treatment.

“[However,] when he boarded the plane, a new Nawaz Sharif came into being. The illness vanished. He climbed the stairs [of the aeroplane] as if he was training for the Olympics,” said the PTI chairman.

He added that the PML-N supremo transformed from a sick person into a politician as soon as he reached London.

“Tell me PML-N, how can you walk behind such a person,” asked Khan.

‘Govt has already planned rigging in next election’

Berating Prime Minister Shehbaz Sharif, Khan said that the coalition government was so weak that it was calling for a National Security Committee meeting to determine the price of petroleum products.

“[They are doing this] so the blame for rising prices falls on the Army,” said the PTI chairman.

Khan asked the people of Multan why so many lotas (turncoats) had emerged from South Punjab and added that he was thankful that members of the parliament, who had voted in favour of Hamza Shehbaz, were disqualified.

The PTI chairman said that the current coalition government planned to rule the country for one-and-a-half years and added that during this time, they had planned to carry out “all kinds of rigging to win the next elections.”

“We were told that they would lift the country’s economy. However, it’s been six weeks since they came into power and the dollar has exceeded the Rs200 mark. What does it matter if you wake up at 7am?” said Khan while targeting PM Shehbaz.

“Now, we know that all of their experiences are based on corruption. Whenever they come to power, they start making their own money and the country becomes debt-ridden,” said the PTI chairman.

Khan also asked the government why they ousted him when they couldn’t handle the country themselves.

“Sometimes, they rush to London, sometimes they say the NSC determine the prices, sometimes they are going to the IMF. The nation should know people who have been looting the country for 30 years,” said the PTI chairman.

The former prime minister told the crowd: “People who made this country debt-ridden cannot resolve its problems. Those who ruined the country’s system cannot fix it”.

“If I do not worry about my country, I would ask them to remain in power for a few months. So that the whole nation gets to see their true faces,” said the PTI chairman. He further added that the more the coalition government stays in power, the “more exposed” they will become.

The PTI chairman said that the incumbent government should be allowed to rule but the country is “getting bankrupt”. He also forecast that inflation would rise further, considering the rising dollar prices.

He also demanded that a date for the elections should be announced as soon as possible and the assemblies should be dissolved.

‘Nation has woken up’

Coming back to his conspiracy narrative, the PTI chairman said that the country’s elite, unfortunately, got scared and took part in the conspiracy against him.

“They removed a prime minister of 220 million people via a conspiracy. They thought the PTI and Imran Khan’s politics was buried but instead of burying the PTI, they awakened the nations,” said Khan. “A revolution is coming and now the people, who had captured the country for 30 years, will be buried instead.”

“Their time is over, this nation has woken up,” said Khan.

‘Maryam took my name with passion’

Turning towards Maryam Nawaz, Khan said that someone had sent him the speech delivered by the PML-N leader in Sargodha yesterday.

“In that speech, she took my name with such passion that I would like to tell her: Maryam, please be careful, your husband may get upset because you were constantly repeating my name.”

He added that he always wonders why the Sharif family hates him when their cases were made before he came to power.

“Our problem is that big thieves go to the assembly and small thieves go to jail,” said Khan, adding that when he went to jail during Musharraf’s rule, he was unable to spot a single big thief and could see the only small thieves.

“It is for this reason that countries like Switzerland are one of the wealthiest nations as they have strong laws,” said Khan.

The former prime minister said that when Hamza and Shehbaz were to get indicted, they were put in power and added that no country has a future if such people are brought to power.

“For this reason, you have to come out and join the Islamabad march with me,” said Khan.

The PTI chairman said that he is seeing a record number of people coming to Islamabad, adding that what he was doing was beyond politics.

“I can foresee a sea of people storming Islamabad,” he said.

“This is not politics. This is the revolution that is turning Pakistanis into a nation,” said Khan. “The current government does not have the courage to make policies for the country.

The former prime minister said that the ruling party would not stand up against the US as their wealth was stored abroad.

“They know if they upset them [the Amerians] their wealth will be taken away like they are doing to the Russians,” said Khan.

The PTI chairman added that people have to come out for this reason with him for the Islamabad match and added that he has to decide which day he wants people to come to Islamabad.

Before making the announcement, he asked the masses if they would stand with him despite the heat and had the passion to stand with him.

The former prime minister said that considering the unseating of the dissident MPAs in Punjab by the Election Commission of Pakistan, he has summoned a meeting of his core committee.

He added that the “sea of people” who will come to Islamabad will only demand the dissolution of assemblies and the date for new elections.