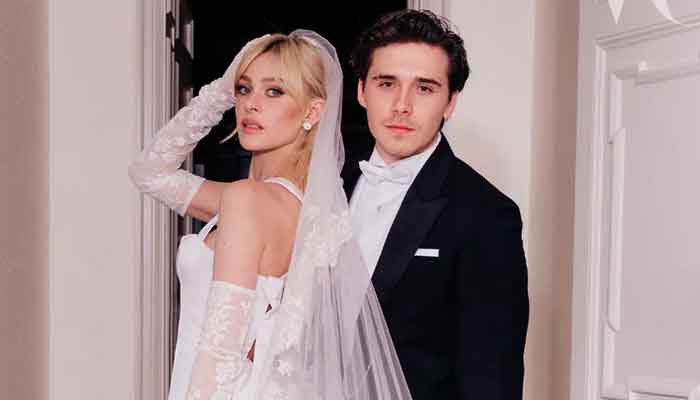 David Beckham and Victoria Beckham’s son Brooklyn Beckham and his wife Nicola Peltz have spilled all about their star-studded wedding at her father’s estate in Florida in April.

The 23-year-old budding chef,  who’s appearing on the front cover of Vogue, revealed  that he couldn’t catch his breath when he saw Nicola, 27, walk down the aisle.

“The highlight of the whole wedding for me was seeing her for the first time in that dress, it was the first time ever in my life when I felt like I couldn’t catch my breath”, Brooklyn said.

Nicola travelled with her mother over to Rome, and fell in love with the dress and 11ft train, with her mum Claudia asking the seamstress to discreetly sew an evil eye in baby blue to “protect” her daughter.

The actress said the gesture, which was revealed after the ceremony, prompted her to “burst into tears”.

Instead of wedding gifts, the couple asked for a donation to be made to Care foundation to help Ukraine.

Romeo and Cruz served as best men and teased Brooklyn over his “lovey-dovey” Instagram posts.

While dad David gave the longest speech and joked about his questionable haircut and apologised for making Brooklyn wear a cowboy outfit for his 1999 wedding to Victoria.

He told the couple: “The most important thing is to make each other happy. And treat your Mrs like gold”.

There were a few entertaining moments which didn’t go to plan though- the rabbi called Brooklyn his father’s name twice, with the groom also landing knee deep in a water feature which was on the aisle.