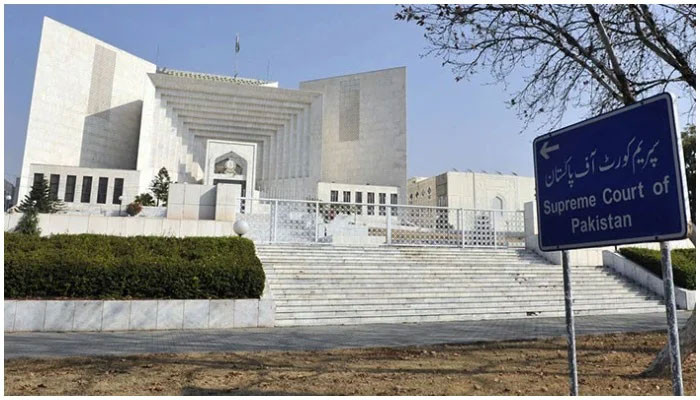 ISLAMABAD: The Supreme Court (SC) of Pakistan on Wednesday ordered the chief commissioner to provide an alternative place to PTI for its public gathering in Islamabad.

At the outset of today’s hearing, Justice Ijazul Ahsan remarked that an emergency has been imposed at all the hospitals in Islamabad while schools and transport have been closed in the capital.

“The country is on the verge of bankruptcy and going through a crucial phase in terms of economy,” noted the judge.

At this, Attorney General Ashtar Ausaf requested that the court should avoid giving observations on the economy.

“Will the entire country be shut down on every protest?” asked the judge.

The attorney general replied that he did not know about the details and sought time to get the information.

“Are you unaware of the country’s situation,” the judge asked.

“You are quoting media reports about the closure of schools. The media’s every report is not correct,” argued Ashtar Ausaf.

Justice Mazahar Naqvi observed that the government had issued notifications about the postponement of examination papers and the closure of schools.

The attorney general said that he was against the blockage of roads but the steps were taken as a party had threatened to hold a “bloody march”.

The IHCBA, in its petition, told the court that the blockage of roads and highways by different state institutions and executive authorities was “preventing” advocates, citizens, including ambulances and doctors, from reaching their destinations.

The association, in its petition, stated that the lawyers were also stuck on the highways and roads for a long period which made them “unable to approach” the Supreme Court, thus, depriving citizens of their fundamental rights and hindering “access to justice”.

“The freedom of movement is the fundamental right of every citizen of Pakistan and all the executive authorities, state agencies, state institutions, and the government and all the provinces and as well as the public functionaries are bound to obey the Constitution and exercise their powers within the four corners of the provisions of the Constitution and law,” read the petition.

The lawyers’ body also cited press reports that stated that lawyers, parliamentarians, and workers of one political party were being arrested and harassed without any reasonable and lawful justification. It stated that the violation of the fundamental rights of the citizens was “illegal, unlawful, and contrary to the provisions of the Constitution”.

The petition stated that the plea has been filed for the “protection of fundamental rights guaranteed under the Constitution”.

The IHCBA has appealed to the apex court to direct the government to “unblock the roads and highways and not to create hindrance in the movements of the citizens”.

It also asked the Supreme court to direct the government to restrain from taking “any unconstitutional and illegal action or harass the citizens”.