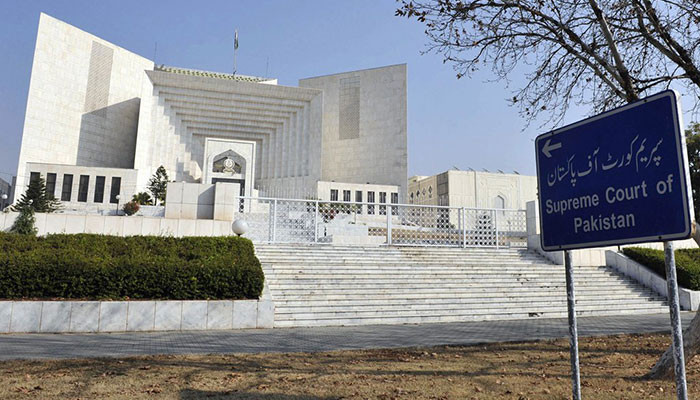 ISLAMABAD: The Supreme Court, in a major decision, on Tuesday issued the verdict that the dissident members of a parliamentary party cannot cast votes against their party’s directives.

The court, issuing its verdict on the presidential reference seeking the interpretation of Article 63(A) of the constitution, said that the article concerned cannot be interpreted alone.

Earlier today, the Supreme Court wrapped up the hearing of reference filed by President Arif Alvi.

The reference was filed in the apex court in March after the Opposition parties submitted a no-trust motion against the then prime minister Imran Khan.

In the majority verdict of 3:2, CJP  Bandial, Justice Ijazul Ahsan, and Justice Munib Akhtar agreed that dissident members’ votes should not be counted, while Justice Jamal Mandokhail and Justice Mazhar Alam Khan Miankhel disagreed with the verdict.

In response to the first and second questions raised in the reference, the top court’s majority judgement said the votes of the defected parliamentarians would not be counted.

In response to the third question regarding the disqualification of members, the top court rejected the PTI’s plea, saving the lawmakers from permanently being barred from the Parliament.

In its opinion on the fourth question, the three judges said that it was the right time for the Parliament to legislate on lifetime disqualification and make laws in relation to curbing horse-trading.

The PTI government had approached the SC in a bid to stop its dissenting lawmakers from voting against Imran Khan and had sought a lifetime disqualification for those who attempted to deviate from the party’s direction.

The former PTI-led government had decided to approach the SC for clarity on Article 63(A) as several PTI lawmakers announced to vote on the no-trust motion against then prime minister Imran Khan — a violation of the party policy.

Despite their decision of not siding with their leader, none of the PTI MNAs had cast their votes of no-confidence against Khan, as the then opposition already had the required 172 votes to oust him.

In the reference, the government sought the apex court’s opinion on two interpretations of Article 63(A) and which one should be adopted and implemented to achieve the constitutional objective of curbing the menace of defections, purification of the electoral process, and democratic accountability.

The reference stated if the constitutional disapproval and prohibition against defection was effectively enforced with deterrence for the future as well, many such members would stand disqualified for life under Article 62(1)(f) and would never be able to pollute democratic streams.

Article 63(A) of the Constitution of Pakistan deals with the defection of parliamentarians.

According to the article, a lawmaker can be disqualified on the grounds of defection if they vote or abstain from voting in the House contrary to any direction issued by the parliamentary party to which they belong.

However, this is restricted to three instances where they have to follow the party’s directions:

Per the article, the head of the party is required to present a written declaration that the MNA concerned has defected.

However, prior to presenting the declaration, the head of the party will have to give the MNA concerned a chance to explain the reasons for defection.

Following that, the party chief will then forward the written declaration to the speaker, who would, in turn, hand it over to the chief election commissioner (CEC).

The CEC will have 30 days at their disposal to confirm the declaration. Once confirmed, the MNA concerned will no longer be a member of the House and their “seat shall become vacant”.